Christmas was always associated with Bond films, back when I was a kid and actually watched regular TV. I understand why. They are generally fun and entertaining, and combine action with adventure and mystery. Also, Bond girls. Despite Bond being something of a relic of a character from a 1950s male fantasy, I still really enjoy watching the films and tend to watch a few every winter holiday period. I realised this year that I’d actually seen most of them, a few quite a lot of times. Hence, I thought I’d come up with a personal tier list of all of the 24 official Bond films.

Before I continue, I should point out a number of disclaimers to avoid the obvious complaints. First, this tier list is obviously and completely based on my own opinion and preferences for what makes an enjoyable Bond film. I have seen all of the films at least once, and watched all but one again (or for the first time) over Christmas. I tend to prefer Bond as a spy rather than an action hero and so this means that a lot of my favourites are clustered around a similar time period, because each film tends to reflect popular culture around the time it was made. Second, the Daniel Craig modern films are written in a somewhat ‘rebooted’ continuity which is designed to be different to the original. It’s hard to compare these to the original Bond, because arguably the James Bond that he plays is a completely different person in a different world. However, I have still included them in the list based on my definitions of the tiers. Finally, there will be some minor spoilers for some of the films.

Speaking of this, the tiers are based on how excited I would be to see them if they were playing on the TV when I walked into the room. The top tier films are films that I almost have to ration myself to avoid overwatching. Below this, the ‘good’ tier are generally Bond films that I would seek out to watch because they are above average examples of the series. Really, it’s the films in these two tiers you should watch if you have never seen one before. The ‘average’ tier consists of films that are worth watching, but are flawed or otherwise unremarkable. The ‘poor’ tier represent below average films in the series that are generally overly corny or dull to me, but may still be worth watching depending on your preferences, and whether you have anything better to do with your time. Below this are films that I believe there is no reason to watch at all, and I have saved a special tier for the one Bond film that is a special kind of hell (I wrote a dedicated blog post for it when it came out because I was so stunned at how awful it was). There’s no particular ordering within a tier. In my descriptions below, I have stuck to a chronological list. 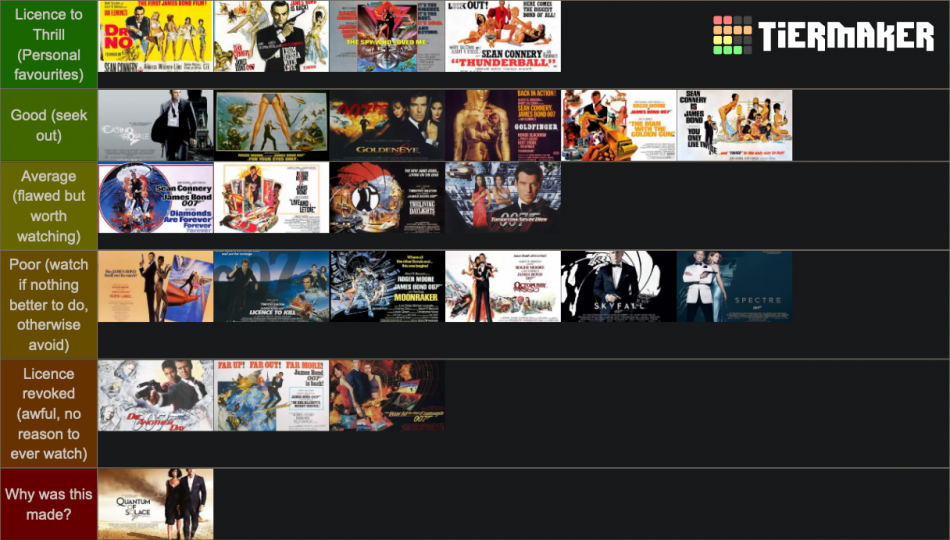 Licence revoked tier (no reason to ever watch)

Why was this ever made?