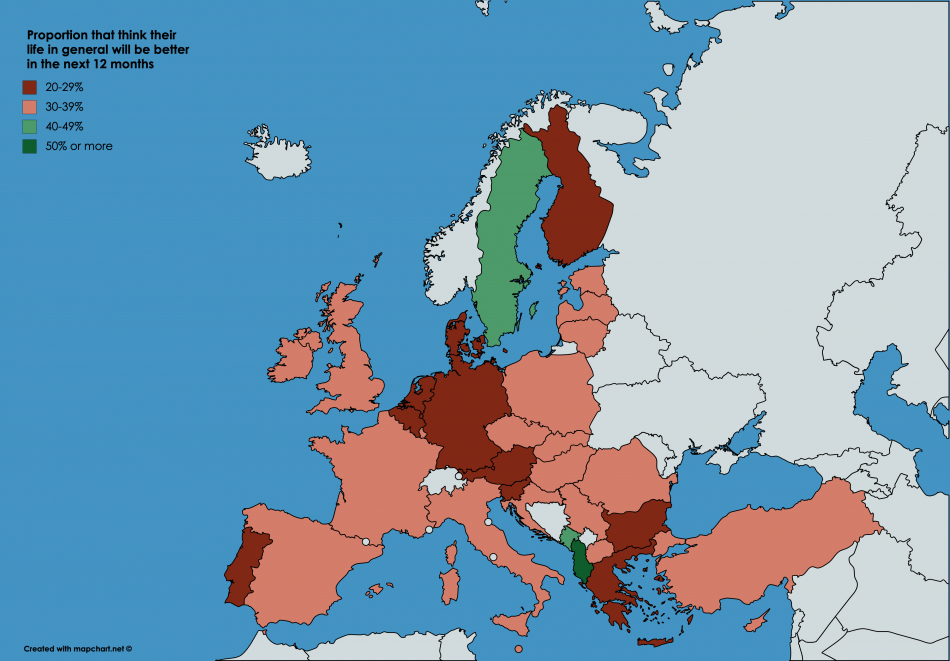 There’s a lot going on within the EU at the moment. Part of the anxiety is as a result of the EU referendum in the UK in 2016, but plenty of member countries have their own economic and social issues to worry about as well. I thought it would be interesting to map the ‘optimism’ in order to see how citizens in Europe feel about what may happen in the near future.

The map above uses the latest 2019 data from the EU’s Eurobarometer 91 survey. The question asked respondents whether they expected their life in general to be better, worse, or stay the same over the next 12 months. In the graph above, I’ve mapped the proportion of the sample that said it would be better. As you can see, for most countries, around a third of the population believe that their life will get better. The least optimistic country was Austria, where only 20% felt their lives would be better in the coming year. However, many of these ‘low optimism’ countries do appear to be relatively wealthy, which could mean that they see stability as more likely and perhaps still desirable. In contrast, 60% of Albanian respondents believed their lives would get better.

As mentioned before, not believing your life will improve might not be an issue if your life is already good and you think it is likely to remain the same. However, nobody presumably wants their life in general to get worse. Therefore, to get a more holistic idea of optimism, I made a second map that plots the proportion of people in each country who believe their lives will get worse in the next 12 months: 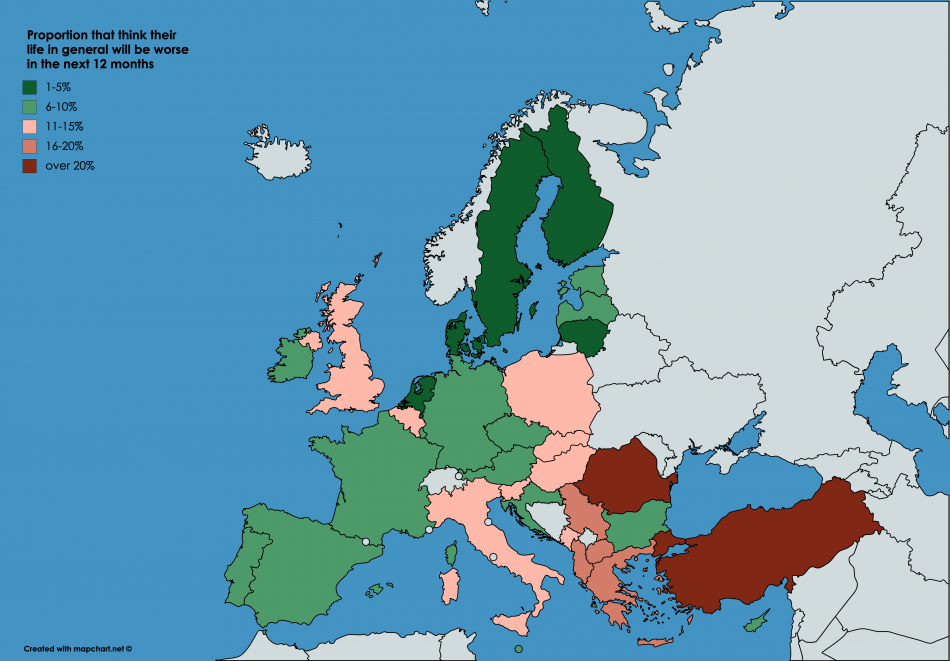 This map is a bit closer to what we might expect given the living standards in each country. The usual suspects in Northern Europe appear to be the most confident that their lives are not going to get worse, whereas those in the South East are the most pessimistic. However, there are a few interesting exceptions. Bulgarians seem to be relatively defiant when compared to their neighbours. Meanwhile, the UK, Belgium, and Italy are three of the more developed and prosperous European nations, but are more pessimistic about the near future than their Western European counterparts. For the UK, this is perhaps understandable given that leaving the EU (if it happens) is bound to lead to short term costs, irrespective of whether it’s a good idea in the longer term or not. Still, it seems like there’s some work to do in terms of stability. Pessimism about the future causes anxiety, which is likely to lower overall subjective well-being.