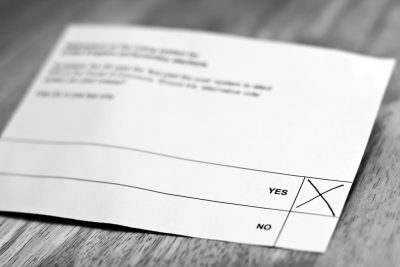 Elections and voting have been on people’s minds this year. Most of us are familiar with the ‘first-past-the-post’ system that is employed in many countries for general elections – the person with the most votes wins in a given constituency, no matter how large or small the margin. Of course, there is no one best voting mechanism. Each has its own advantages and disadvantages. The question is often ‘which bad scenarios are we willing to tolerate in a society?’ Let’s take a closer look at some of the different methods available.

This is the simplest method, and is the one most often used. The winner is the one with the most votes in a given domain. Unfortunately, this can mean that the winner is actually undesirable to the majority of people.

As an example, imagine an election with 4 candidates: A, B, C, and D. In this election, A is very polarising. Think of an extremist candidate who has some loyal, vocal supporters, but does not suit the majority of people. On the other hand, there are small differences between B, C, and D. In this case, one extreme scenario is that people can’t decide between these candidates and split the vote between the 3. If there were 100 voters, and B, C, D received 24 votes each, this amounts to 72 votes against candidate A. Yet A alone receives 28 votes. A wins the election, even when 72% of the population were strongly opposed to A.

This sort of thing often leads people to tend towards a two-candidate system. If B, C, and D were truly very similar, then coordination in an effort to pick just one would work in principle, but is in practice difficult to achieve.

One modification to the first-past-the-post system that prevents the former problem is to only accept a winner when more than 50% of people in a domain vote for that person. This means that it can never be true that more people were opposed to a winning candidate than in support. Where there is no clear winner (no one candidate receives more than 50% of votes), then the top 2 candidates can get a second election (a runoff), which ensures that the overall winner will have more than 50% of votes by definition. Whilst it requires individuals to make a compromise in cases where their nominated candidate is eliminated in the first round, it does prevent such extreme cases where a genuinely unpopular candidate can be allowed to win.

If we look at the 2016 US Presidential Election as an example, Trump won clearly in 23 states, translating to 195 electoral votes. Clinton won in 13 states, translating to 175 electoral votes. However, there were 15 remaining states where nobody had over 50% of the votes. This leaves a potential 163 electoral votes up for grabs. In other words, the election would have been far from decided on the first round of votes alone, had there been a two-candidate runoff afterwards. It is difficult to say whether this would have changed the outcome (it would largely have depended upon where Green Party and Libertarian votes went after their candidates had been eliminated). However, it at least overcomes the social problem of electing a non-majority supported leader.

Both the previous methods are simple because of one common fact. Only one vote per person is allowed, which means each voter has one ‘point’ to allocate in any one election. There is another group of mechanisms that does away with this concept, and allows each votes to have multiple points, which can be distributed between candidates. The idea is to increase the amount of information provided about each voter’s preferences.

Let’s go back to our original A, B, C, D example. One of the most popular rank-based systems is also one of the simplest – de Borda voting (or the Borda count). Here, people just order their candidates from most to least preferred. If we say that the bottom candidate gets 0 points, then the most preferred would get 3. However, the middle two candidates also get points (2 or 1 depending on position). In contrast, a regular vote in an unranked system only allows for a single 1 point vote, whilst all other candidates get 0.

The advantage of the de Borda system is that it is impossible to have an extremely polarising figure like A win an election. Consider the case as before, where there are 100 voters and 28 staunch A supporters. If they all rank A first, then A gets 28*3 = 84 points. However, that’s all A would get. The other 72 voters, remember, are B, C, or D supporters, and all despise A. Therefore, given that they all put A at the bottom of their ranking, A would not receive any more points from the remaining voters. Suppose, like before, that B, C, and D have an equal split of supporters i.e. 24 each. Then, B, C, and D receive 24*3 = 72 points. However, there are 300 points remaining to allocate, since we haven’t discussed the ‘middle’ positions yet. But all of these remaining points must go to either B, C, or D, because even the A supporters must choose 2 alternatives that receive a positive number of points. Therefore, either B, C, or D will win the election.

Of course, the downside to this method is that it won’t necessarily elect the most popular candidate. It just avoids the election of the worst (least popular) candidate. That’s fine when there is a popular but undesirable candidate, but it can become problematic when you have one desirable candidate and multiple (extremely) undesirable ones. This leads to a further exploitation problem – a party can just release a bunch of similar candidates in order to absorb points.

Of course, there are many more mathematically sophisticated ranking mechanisms that introduce conditional point scoring, and/or change the distribution in scoring. This would be the same idea, for example, as points awarded in motor races. The distribution is skewed so that the winner of the race is rewarded disproportionately highly, and the remaining positions tail off rather quickly. In the previous example, we could have had something like 6, 3, 1, 0 instead of 3, 2, 1, 0, in order to allow people’s favourite to have more of an impact.

How do we choose?

To reiterate, this comes down to priorities, and what we, as a society, are willing to tolerate. If this question had a simple answer, there simply wouldn’t be as much debate and study of voting as there is and has been for hundreds of years. I suppose we could ask people to vote for which mechanism they’d prefer…

One thought on Voting Mechanisms